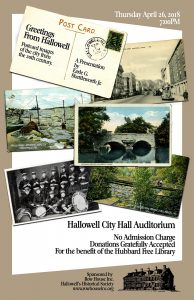 There was a time before Instragram, SnapChat and SmugMug when, if you wanted to share a picture, you visited the local apothecary, picked up a postcard, stuck on a penny stamp and dropped it in the mail. In fact, post cards were so popular the Penobscot Marine Museum has a collection of over 50,000 photographs of scenes from the New England states and New York that were featured on cards.

Nearly every town had a selection of scenic picture post cards and Hallowell is no exception. On Thursday, April 26, Earle Shettleworth, Jr., Maine State Historian, will send “Greetings From Hallowell,” as he share images from postcards produced the early 20th century. This is an entertaining glimpse of Hallowell’s pictorial history and no postage is due!

The evening’s program, being presented in the Hallowell City Hall Auditorium at 7:00PM, is sponsored by The Row House, Hallowell’s Historical Society. Admission is free, however donations are being accepted for the benefit of the Hubbard Free Library.